The garage has become a workhorse in most homes. People use them multiple times a day and for a variety of reasons; from parking to storage. There are garage door problems you should look for and have a trained professional help you is the door problem.

Probably the most important part of the garage is its door, without it, the garage can’t serve its main purpose. A garage door is supposed to last up to 30 years! But sometimes things just go wrong before that time.

We’ve compiled a list of some of the most common garage door problems that can happen, so you can stay on the lookout and fix your garage door before they cause serious damage or disruption.

The most obvious and inconvenient of garage door issues is when it won’t open at all. For most of its uses, a garage is useless if the door isn’t working.

This problem is almost always caused by something in the opening machinery going bad. The chain could possibly be off the track or in need of some kind of lubricant. There could be a problem with the power supply. Or the machine could have just gone bad altogether.

Often the other problems we’re going to discuss will be precursors to this major one. So keep an eye out to avoid losing all function.

Let’s face it, garage doors aren’t really that quiet to begin with. But when you hear an extra loud, screeching, or scratching noise happening when it’s in use- you know there’s a massive problem.

This a great opportunity for some garage door troubleshooting. Look for disturbances in the chain, something stuck in the track could be causing the annoying sound.

Loose hardware or other parts is also a common cause of extra noise.

Other problems that you can probably figure out on your own are visible trauma the door has received.

This takes many forms and has just as many solutions. But one of the most common issues is dents. These come from all kinds of things; backing into the door with the car or kids running into it with a bike.

The elements outside can also cause lasting damage such as rot or rust depending on the material of the door. It’s important to keep up on maintenance to prevent these.

One of the most convenient things about having a garage door is having a remote to open it with. If the garage door opener won’t work the door suddenly becomes a huge hassle.

Typically, this is an easy fix with just the change of batteries getting you back in action.

But this may also be the time to upgrade your system to an even more convenient digital one. Many people prefer using their phones as the remote, which eliminates the need for batteries.

A garage door is generally created to withstand the elements but the inside of the garage and your things are not.

If the garage door doesn’t close and seals properly, you can eventually have major problems from water coming in and staying. It’s important to have an efficient weather sealant and that it be checked regularly.

This is a piece of rubber material that attaches to the sides and bottom of the door. If it gets damaged it can easily be replaced.

Possibly the most frustrating problem a garage door can have is when it quits what it’s doing halfway through. Just when you think it’s going to work properly, it stops.

Some doors have a spring in their mechanisms that occasionally needs replacing, a professional can get this job done quickly and efficiently. Then you will be good to go.

This problem could also be caused by something triggering the sensors, so be sure to check that nothing is in the way of the lasers.

7. Moving Out of Sync

It’s a very worrisome sight to see one side of your garage door coming up before the other side. Everything looks like it’s going to break any second.

Luckily, this is usually just a sign that there is something in the tracks blocking the smooth motion. Wiping down the tracks and removing any debris can usually return it back to working order.

If not, this could also be a sign that the springs need replacing as well.

There is nothing more annoying than waiting for a garage door to open when it’s going slower than molasses.

On the other hand, it’s quite frightening to see a garage door slam down very quickly.

Both of these scenarios indicate problems with the opening machine. If it’s moving slowly it’s probably related to the rollers. They often get covered in different kinds of buildup restricting their movements.

A quick close is most likely going to need a professional fix as cables or springs are probably fully damaged.

And then there’s the weirdest of the garage door issues; when the door opens or closes on its own without any prompting.

It’s probably not a ghost playing tricks on you. Instead, these kinds of problems generally have to do with the electrical components of a garage door.

Either the power supply has been disrupted (including dead batteries on a remote), the wiring has had some kind of faulty signals, or the machine has gone bad somehow. Beyond the remote batteries die, you’ll want a professional to diagnose your actual problem to get it resolved quickly.

Many people depend on their garages to fill specific needs in their homes. Maybe they use it to keep their car out of the elements. Or perhaps it’s been turned into a workspace. Certainly, many garages serve as a home gym. And we can’t forget all the storage done in these spaces.

When you’re experiencing garage door problems it can be incredibly frustrating. Especially if you count on that area.

Being able to detect these problems early on before they turn into massive issues can help lessen the blow.

If you are in need of a trained professional to repair your garage door, contact Garage Harmony today!

Home Services
About Us
Testimonials
Careers
Contact Us
Site Map 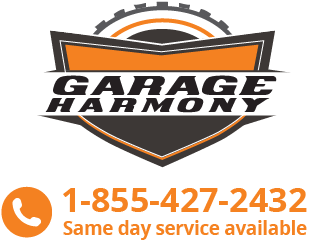